Shrines are places of trial located throughout Legend of Zelda: Breath of The Wild’s map. They’re like small dungeons. Once inside, you’ll have to complete platforming challenges and various other puzzles. In the end, you’ll be rewarded with a spirit orb. There are 120 shrines in the game and after completing them all you’ll unlock Green Tunic of the Wild. In this guide, we’re going to show you all Zelda Breath of The Wild shrine locations and help you solve their puzzles.

The map is divided into regions for easier usage. Click the region name to get a more detailed description of all the shrine locations in it.

In the first area – Great Plateau – you will find four Shrines:
Hard part about these shrines are the ones in the mountains. In order to go through the snowy mountain, and reach the shrines you’ll need something to warm you up. You can use a torch melee weapon. Swing your torch over the fire to light it. If you have Spicy Pepper, Raw Meat and Hyrule Bass you can make Spicy Meat and Seafood Fry meal that gives cold resistance, and if you give the meal to the old man in the cottage during the night, he’ll reward you with Warm Doublet. We have a comprehensive guide How to protect from cold & solve Old Man’s Warm Doublet recipe.

This region is positioned just east from the first one – Great Plateau. It consists of two major areas – West and East Necluda.

Faron is an area in the south. It’s made up of zones like Faron Grasslands and Sea, Lake Hylia, Bronas Forest, Corta Lake, Riola Sprint, Rodai Lake and others. 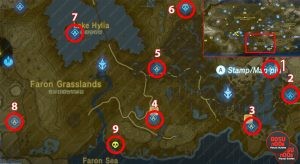 Gerudo desert is located in the southwestern part of Hyrule. Three shrines listed here are found on the way to the desert from Central Hyrule. Some of the areas that compose Gerudo Desert are West and East Barrens, Gerudo Ruins, Toruma Dunes, Northern Icehosue, Palu Wasteland and many others.

Gerudo Highlands is the mountainous region north of the Gerudo Desert. It encompasses the area east of Mount Agaat, west of Zirco Mesa, south of Hemaar’s Decent and north of the Desert, with Gerudo Summit in the center.

Hebra is the area located in far northwest. The large, snowy Hebra Mountains are at its center. You’ll also spot two larger areas like Tabantha Frontier and Tabantha Tundra.

There are no easy shrines to be found in northern part of Hyrule. This area consists of Great Hyrule Forest and Thyphlo Ruins. The first shrine is at the center of the forest. You’ll need to get here first. From the first shrine, you can find three Korok’s that start three shrine quests – trials. All three of them lead to one of the shrines.

Eldin is a region in the northeast. It consists of three larger areas, Eldin Canyon and Mountains and Death Mountain. There is a town called Goron City here, as well. You’ll need a Flamebreaker armor set to be able to traverse the Goron dominion..

Akkala is the north-easternmost region of Hyrule. It stretches from the sea in the east to Death Mountain in the west, and from the far north of the map to Toto Lake and Ploymus Mountain in the south.

Central Hyrule is a large area in the center of the map. It stretches from Castle Hyrule on the north to Lake Kolomo in the south. It’s surrounded by Hylia River in the east and Regencia River in the west. It’s a huge area, but there aren’t a lot of shrines.

Kass is an NPC you will come across every now and then and he gives you quests with riddles to solve in order to discover shrines. We made a comprehensive guide for every Kass Shrine quest in the game and how to solve their puzzles. If you are stuck use that guide to uncover the shrines. Here are the shrine quests covered:

UPDATE: What follows is information we had on this page before the game came out and gives general information about shrines in Zelda BotW.

The shrines we’ve seen so far have all been underground. Their entrances were easy to notice – imagine a cave mouth adorned with glowing, orange runes. You’ll be able to spot them from quite far away, so use any chance you get at higher ground to scout out your surroundings. You can plant map markers on places you deem interesting, in case you don’t want to visit them right away.

Once you reach the shrine, you’ll use your Sheikah slate to gain entrance. The runes will turn blue, and an elevator will appear. Inside, jumping puzzles and challenges await. Many of them include finding inventive ways to use your rune powers. Getting to the end of the shrine is usually not that hard, so you’re pretty much guaranteed a spirit orb. However, there are other treasures inside, and they’ll often require a bit of lateral thinking.

They may include enemies, but the focus is usually not on fighting, but on figuring out a solution to the puzzles inside. They’re all tied by a theme in each shrine, so there isn’t much guessing involved. In case you do get stuck, we’re going to list the shrines and the solutions to their challenges on this page.

Once the game launches, on March 3rd, we’re going to start updating this guide with more info. If you discover a shrine that isn’t here, feel free to share your findings in the comments.