One of the best Sci-fi novels of the last century inspired one of the best strategy games in the early nineties and probably the single weirdest big-budget movie of the same era. Dune II: Battle for Arrakis (1992) and David Lynch’s Dune (1984) are considered timeless classics, eternal as the desert planet itself.

The global interest in all things Dune was revitalized with Villeneuve’s glorious movie from 2021. Not attempting to capitalize on that would be foolish, to be honest. Funcom and Shiro games were the first to pounce on that opportunity, announcing a brand new game set on Arrakis. Dune: Spice Wars recently entered early access on Steam, and here’s what we think of it.

Dune: Spice Wars is an interesting hybrid of 4X and classic real-time strategy games. Leading Atreides, Harkonnen, Smugglers, or Fremen, you will be mining spice, conquering territory, developing industry and military, fighting or dealing with rival factions, voting in Landsraad, and avoiding Shai-Hulud. Currently, there are three victory conditions, Domination, Hegemony, and Political. The first option is the most straightforward – crush your enemies, see them driven before you, and hear the lamentations of their women.

The second option, Hegemony, is tied to the accumulation of victory points, and it’s the least interesting of all three. The third is most intriguing, at least in theory. It is achieved by being elected as a governing faction of Arakis and staying in power for sixty days. Currently, it’s way too easy for Atreides to obtain that kind of victory due to the massive bonuses for dealing with Landsraad. I guess it will be nerfed in one of the updates down the line. 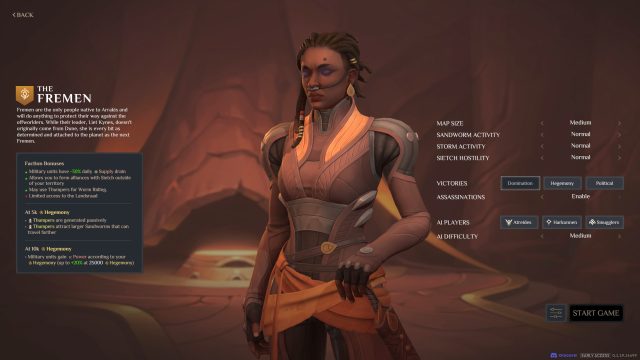 So, Atreides, Harkonnen, Smugglers or Fremen? Although they offer some differences, all four play pretty similarly. No matter whom you pick, you’ll start with a single ornithopter buzzing over your faction HQ that is locked until you accumulate a 2000 hegemony score. The map of Arrakis is, by default, covered by a thick fog of war, but that’s what flying tiny gnats are for.

The first thing on the agenda should be locating a zone with a Spice field. Taking possession of any area involves conquering or assimilating its settlement. If you play as Atreides, you could use both methods, but if you opt for (slower) assimilation, you get the settlement with their garrison intact. Once the village is in your hands, you can start developing it depending on the available resources and/or your global strategic needs.

If a zone has a spice field, you’ll build the spice refinery and start collecting The Most Valuable Commodity in the Universe (TM). You’ll use collected Spice in several ways, primarily for paying the imperial tax every month (Atreides) or bribing the Spacing Guild (Fremen). You either pay the tax/bribe or suffer the debilitating temporary debuff. Surplus Spice you can automatically convert to Solari, the default currency used for recruiting units and paying the upkeep for structures, or trade it with other factions for something else. 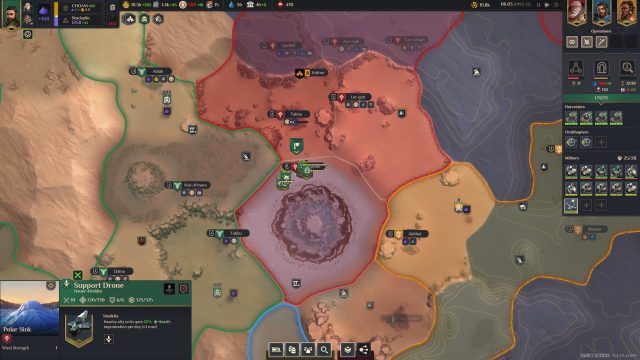 Besides Spice and Solari, and depending on faction, you’ll use plascrete, water, manpower, fuel cells, influence, authority, and knowledge. That’s a lot of balls to juggle, but Dune: Spice Wars aspire to be something greater than a simple RTS game. Most resources are intertwined in the sense of their expenditure. For example, you’ll use plascreete to build and maintain the infrastructure; recruiting new units demands Solari and manpower, but manpower-raising objects need plascreete and free building slots. Each settlement has limited space for new buildings, so you’ll need to prioritize, depending on shortages you might be experiencing. You can always buy more space provided you have plascreete to spare. Or you can conquer or assimilate more settlements if you have a surplus of water, authority, or troops.

Once you feel confident in your resource flow, you’ll recruit some troops and start harassing the competition. Each faction starts with similar infantry units, with stronger ones tied to the progress in the scientific tree. Apart from combat power, each unit has a supply limit, expended when traveling over the open desert and replenished in friendly territory. Besides walking, your troops could use air transport (Atreides, Harkonen…), provided you had built a network of airfields. Fremen utilize Sandworm riding for rapid movement, which is obviously much cooler. 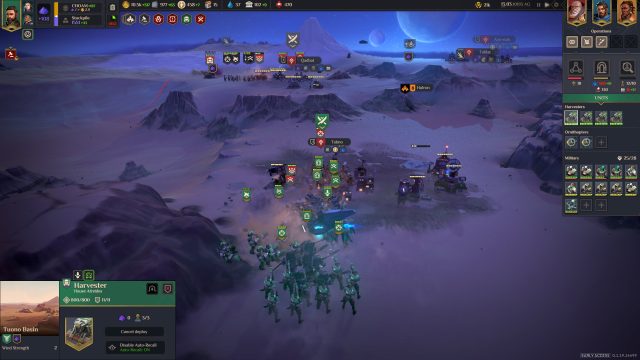 Diplomacy is pretty basic right now. You can trade with factions and set up a few basic agreements, but that’s it. There’s also Landsraad, galactic parliament, where you could try to outvote other factions on various issues. Frankly, in its current form, Landsraad is just a hassle, similarly tedious as UN session in Civilization games. Too bad that one of the victory conditions is closely tied to Landsraad voting. The whole premise is doctrinally unsound to some degree. Why would Fremen, for example, feel compelled to follow the Landsraad decisions? Espionage and contra-espionage are other segments that would benefit from streamlining. It has an arcane interface, and its operations are not easy to understand without the tutorial, which is nonexistent right now.

Lastly, I would like to emphasize that those mighty Sandworms are woefully under-used. Worms sometimes show up when there’s a commotion (combat), but you can move units from rippling sand and be perfectly okay. They don’t really bother harvesting operations either. If you play a faction relying on Spice harvesters, you can enable automatic pickup by carryall on the first sign of danger. Play as Fremen, and you will be utterly immune to harvesting harassment.

Dune: Spice Wars shows much promise, even if it’s mostly bare-bones for now. Currently, the game lacks a campaign and multiplayer, offering only the skirmish mode against AI factions. On the plus side, it sells for significantly less than the finished product will cost.