If your mental well-being suffers from the absence of neon-punk retro tactical extravaganza involving giant movie monsters, Kaiju Wars is here to help. Non-trademarked equivalents of Godzilla, Rodan, King-Kong, and others are stomping over cities, aroused by the shadowy force bent on destroying humanity. Major Danger and dr. Wagner are at the forefront of desperate resistance to this mega-onslaught.

The fact that someone named Major Danger leads the armed response to the monster threat tells you everything you need to know about the plot and execution. Kaiju Wars is a self-conscious parody of low-budget monster movies from the last century. Giant beasts, cultists, aliens, conspiracies, gung-ho military men, and cautious scientists galore! The six-chapter campaign is a tour de force around the world, defending cities while trying to understand the nature of the monster menace.

Once more into the Breach

Kaiju Wars is heavily inspired by Into the Breach, the second title by the brilliant creators of FTL. Despite many visual and conceptual similarities, the significant difference lies in the type of the experience. Kaiju Wars is not a randomized roguelike. It’s a classic turn-based tactical game with scripted missions and a fixed layout of maps. Instead of specialized, irreplaceable mechs with unique abilities, you will use tactical cannon fodder. Tanks, artillery, infantry, fighters, bombers, and experimental weapons are expendable and easily replaceable. Instead of campaign restart, defeat in Kaiju Wars simply means reload.

Missions take place on a square grid full of civilian and military infrastructure. In most cases, your primary task is keeping the dr. Wagner’s lab intact. If Kaiju obliterates it, it’s game over. Monster or, later, monsters, spawn in predetermined locations and immediately start trashing nearby buildings. Kaiju never chases your units as it navigates to the closest building, but it will crush everything in its path. Monsters have multiple lines of hit-points, each providing a speed boost. Every attack will grind down its HP, slowing it down when reaching a line threshold. In some missions, slowing down the beast is all you can hope for, keeping it at bay while dr. Wagner works and pursues scientific milestones that would win the day. 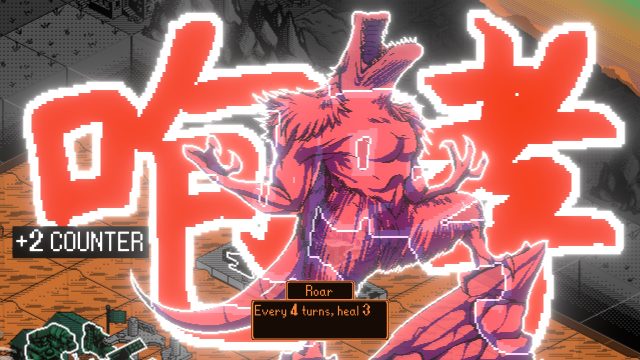 There are five different Kaiju in Kaiju Wars. Each is a classic movie monster with a different name and few unique abilities. You’ll fight against a giant ape, a massive seaborne lizard, a fiery bird that comes out of a volcano, a tunneling worm, etc. Mega ape, for example, heals for a slight amount every time it destroys a building; a worm is invisible unless you position a mobile radar unit near it. A phoenix-like bird leaves a blazing wake that destroys your units… Their abilities mutate depending on the mission when you force them to retreat and regenerate. Godzilla-like sea lizard gains a mouth laser that wipes everything at two frontal hexes, Rodan bird gets AoE pulse that destroys surrounding units every fourth turn, and so on. Those colorful beasts have attractive but unskippable attack animations that will grow stale throughout the campaign.

Strong as they are, they go down after the sustained fire from your diverse combat arsenal, part of which is upgradable. Winning the missions awards you medals, which you can invest in upgrading your small batch of elite units. Boosting their land/air attacks, counter-attacks, and mobility through meta-progression is helpful in the long run. You can use those medals to recruit extra scientists that provide various passive bonuses during missions. 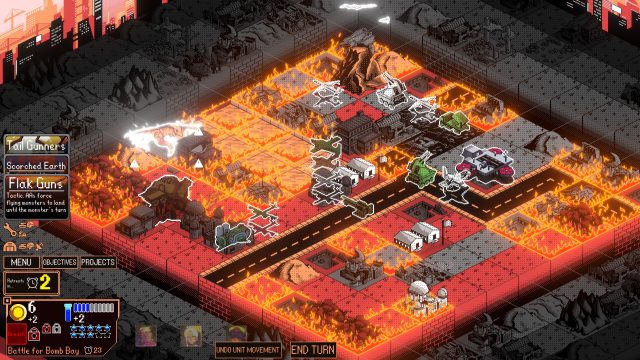 Your tactics will vary depending on the monster in question, mission parameters, and deployable project cards. Those cards provide various boosters, modifiers, experimental units, and tactics. Using them in proper context is key to victory. For example, you will have a much easier time with a fiery flying monster if you engage it with AA units after deploying the specific card that enables said units to shoot down the beast after one salvo. Once downed, flying Kaiju will be easy prey to your infantry, tanks, or artillery. This is, of course, just one of countless examples of combat synergy. Like I said before, winning the mission with brute force alone is not always an option. Sometimes you simply won’t have the time or the resources to eliminate the Kaiju, and you’ll resort to pursuing the scientific victory. The number of science points you earn each turn depends on the number of labs on each map. It always pays off to build more, if for nothing else, than as a fallback point for Dr. Wagner’s team.

Evacuating the primary lab is a rule rather than an exception. The mysterious organization behind the Kaiju attacks is breaching your security each turn. Once the timer reaches zero, Kaiju will drop what it had been doing and zero in on Dr. Wagner. If you don’t have a backup lab, you are in a world of hurt as the science team doesn’t produce science while evacuating. 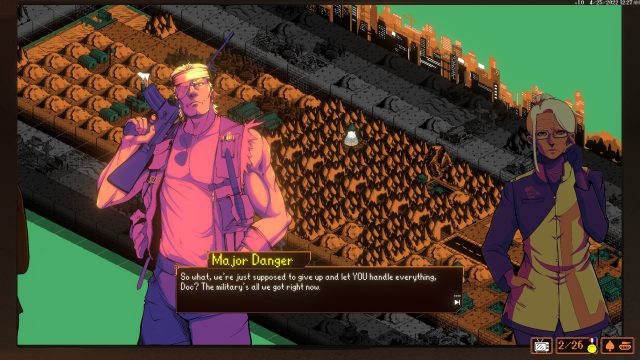 The main issue with Kaiju Wars is inconsistency. Each new mission presents the player with a different challenge and slight to significant ruleset change. For example, in most chapter three missions, you are not allowed to use bombers. Some missions provide their own set of project cards, while others will enable you to make your own set. This constant rule-coaster prevents you from properly relaying on your elite upgradeable units, making the entire upgrade process only half-useful.

Those changes often require the player to have an experimental run through the mission to see how things would play out. Mid to late campaign missions are always full of surprises. The unexpected spawn of a second or third Kaiju on the undefended map section easily screws everything up in the last second, prompting a restart. And grumbling.

My major gripe is that every surprise is scripted, and ruleset inconsistency usually means force composition limit prevents you from being flexible enough to creatively respond to threats. There is always the best way to win every mission; you just need to replay it several times to figure it out. Stoicism and patience are all you need here.

Kaiju Wars is a solid, albeit slightly flawed game. If you are in the market for monster retro goofiness and can forgive the necessity of trial and error, you might extrapolate a solid amount of fun from it.

NEXT POSTHow to Reroll in Echoes of Mana