Lego Star Wars: The Skywalker Saga is the biggest and arguably the best title in the thirty-plus-year history of Lego games. It represents significant progress compared to most games bearing Lego licenses. Its scope is gargantuan, as it successfully puts the several decades of Star Wars mythos under one interactive, goofing roof.

Episodes I to IX, all nine Star Wars movies from the main saga, got a cartoony makeover. The cinematic flair is preserved through masterful recreation of entire plotlines and great voice acting (sans original actors, sadly). Most of the heavy stuff, such as Anakin’s downfall, is presented in a caricatural manner. In Skywalker Saga, there is no question if Han shot first. He didn’t shoot at all – he just plonked Greedo unconscious, hurling his DL-44 blaster across the table. Later, he pulled a banana instead of it when confronted by Darth Vader in Bespin’s banquet hall.

Wacky treatment is not exclusively used as a mellowing tool, as almost every scene got some explicit “enhancement “of that nature. The examples are far too many to mention, putting even serious characters like Qui-Gon Jinn or Emperor Palpatine in leading roles of light-hearted gags. I know what you are thinking. Developers took a significant risk of turning every beloved character into a Jar-Jar Binks clone but somehow made (almost) everything look cool. The younglings, the game’s intended audience, will probably be even more receptive to the tonal difference between Skywalker Saga and the source material.

Game for literary, everyone

Compared to most modern Lego games, a major difference is a shift in perspective, which is now classic over the shoulder, utilized in most 3D action adventures. It works equally good for blaster-wielding characters, Jedi with their lightsabers, unarmed droids, or even for starships of all sizes. Controls are simple but precise, requiring almost zero practice or adaptation.

There is a lot of shooting and slicing action in this game, often augmented with some simple puzzles. None of that is difficult by any stretch of the imagination, nor there’s any penalty for death or failure. Everyone could argue that Lego Star Wars: The Skywalker Saga is very easy, even for children. Well, it is, but the point of the game is not a skill challenge in a traditional sense. This is, above all, a relaxing experience intended to keep you invested in Star Wars mythos. A beautiful waste of time that doubles as an alternative perspective on familiar plotlines and characters.

There are, however, few rare exceptions to that rule of easy. Winning the Pod race on Tatooine in Phantom Menace is more challenging than anything else in all nine episodes. I don’t know if the game caught me unawares after a few hours of smooth sailing, but it took me four tries to come on top of that bastard Sebulba. Some optional puzzles can present a modest challenge too.

Speaking of optional… You can rush through the episodes without any regret. Ignoring most optional objectives doesn’t mean they are lost, as you can chase everything you missed later when you decide it’s time for some free-form roaming.

A galaxy is a big place 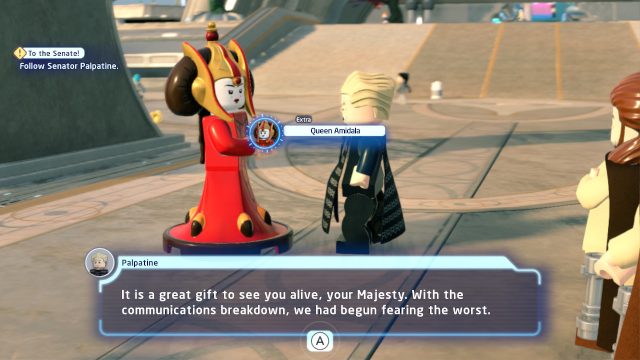 You can start the game at the beginning of every trilogy (Episodes I, IV, or VII). The rest of the “movies” are progressively unlocked as you finish previous ones. Completing episodes also gradually opens up more locations on the galactic map, broadening the stage for free-form gameplay. Galaxy Free Play is the “endgame “of Skywalker Saga, and it has the potential to chew-up dozens of hours above the twenty-plus you had already invested in completing episodes. You’ll accumulate lots of things during your galactic travails, but mostly Studs and Kyber bricks, two essential ingredients for leveling up the characters. There is a separate talent tree for every class and a shared tree for everyone. However, almost all those hundreds of upgrades are redundant due to the absence of any serious challenge. You could ignore all that and still win big in all respects. 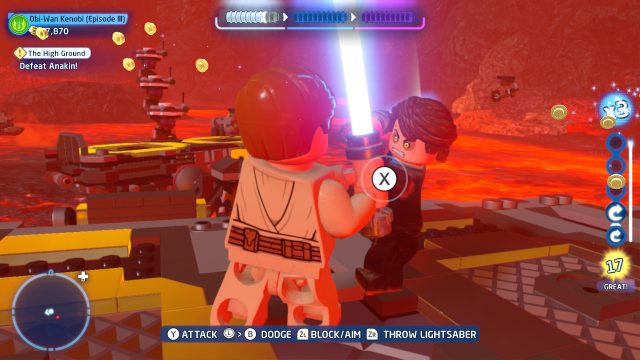 If you want to collect stuff for the sense of collecting, you came to the right place. The number of unlockable things in this game is ridiculously abundant. There are four hundred playable characters, for example, over thousand Kyber bricks to be found and a respectable number of spaceships, mini-kits, and other stuff to be had. It’s a completionist paradise. In Free Play mode, you can swap characters and ships at will, roaming the vast galaxy to pursue that next unlockable. Some of the stuff is easy to get, some are locked behind the code (look here), and for some, you’ll need to invest a lot of time, virtual money, and sweat.

No trace of JJ Abrams 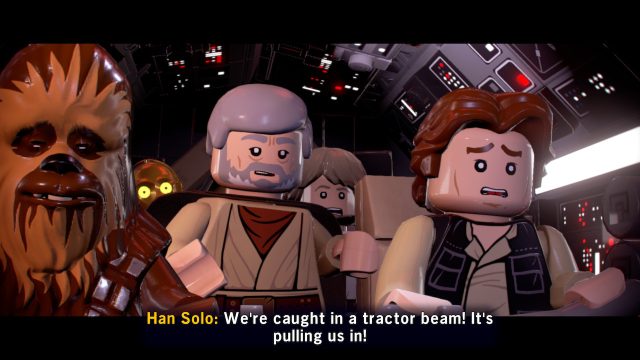 I played Lego Star Wars: The Skywalker Saga on Nintendo Switch, which was not ideal, considering it looks significantly worse than other versions. On PlayStation, the beautiful glistening sheen that makes virtual plastic looks real is everywhere. It provides the proper feel of playing with Lego miniatures. Lighting is also awesome on any platform other than good old Switch, so go for the “big “console or PC version if you have the option.

I really liked Lego Star Wars: The Skywalker Saga. Even the last three episodes, almost universally reviled in their true form, are fun here. Almost as if everything is better without the direct involvement of Disney people, eh?