A sign of the shitty times we live in is that even Kirby went post-apocalyptic. That’s right, cute pink blob from countless games dating back to 1992. is currently adventuring in the abandoned ruins of the civilization much like ours. Fortunately, the setting is the only remotely depressing thing about Kirby and the Forgotten Land. Fresh, three-dimensional perspective and superbly designed levels provide a ton of light-hearted fun for everyone.

Many developers are making a massive mistake in the difficulty department, targeting kids with cute iconography but simultaneously demanding a level of skill that most youngsters don’t have. Crash Bandicoot series is a prime example of that approach, but Kirby’s people constantly avoided that trap with great success. Apart from two difficulty levels, one clearly aimed at kids, Kirby and the Forgotten Land are structured in such a way that it never presents an insurmountable obstacle. At the same time, the game is full of optional secrets and mini-challenges that players can tackle if they choose to. None of the stuff you’ll encounter is patronizing in the “everyone is a winner “way. On the contrary, the game motivates you to escalate all the time. It just doesn’t force you to it to reach the end.

It’s not a clone of Super Mario Odyssey

Kirby and the Forgotten Land is a lot less similar to Super Mario Odyssey than you might think from watching the official trailer. Its levels are mostly linear and smaller in scope, more straightforward, if you will. Nevertheless, they are stuffed with secrets and optional stuff suited for skilled completionists. The game is clearly made to be replayed several times, as some things cannot be unlocked in a single run.

The game utilizes the classic Nintendo World divide. Plains, water, fire, snow, and other elementally-defined zones are separated into the campaign and optional levels. In order to unlock the boss fight that ends each chapter, you must rescue a specific quantity of cute little Waddle Dee creatures. To reach the required number, you’ll have to find hidden cages inside main missions; that number is never overwhelming, so the game retains a laid-back attitude until the end. Optional missions are weapon-specific time trials that reward you with stars, crucial weapon-upgrade material.

A shining city on a hill 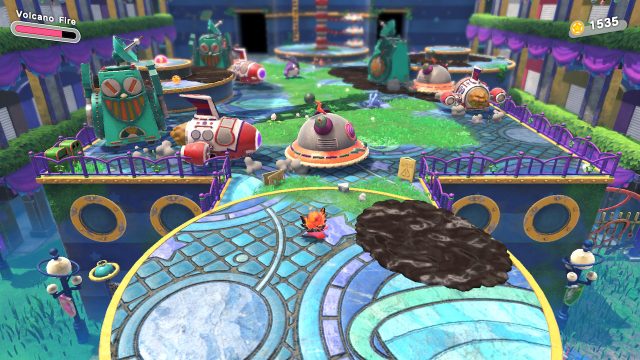 Rescuing Waddle Dees unlocks many quality of life improvements inside their city, your temporary base of operations. Restaurant, cinema, post-office, Colosseum, and other objects aren’t crucial for progression like weapon shop (you have it by default) but exist as cute distractions and means for getting optional upgrades. One of the camp activities is the gacha machine. By investing gold, the currency you also need for upgrades, you can try your luck farming for collectible figurines.

In general, the camp activities and the missions proper are expertly designed across the board. Every single campaign mission provides something new and fresh. The developers really turned imagination up to eleven, providing a cavalcade of surprises. The golden rule is to expect the unexpected! Simply put, nothing ever becomes stale here. 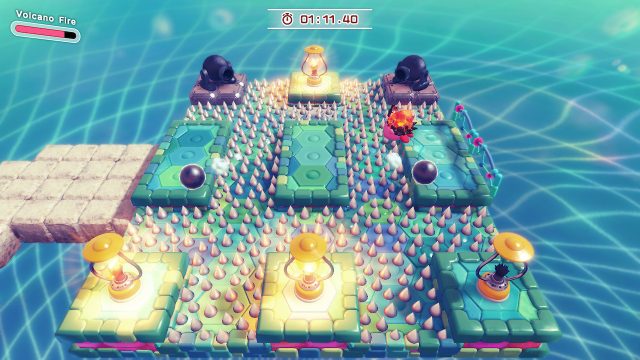 Although this is Kirby’s first foray into the 3rd dimension, his signature abilities are still there. Crucial among those is Copy – Kirby sucks in his enemies, replicating their armament and combat technique. Those abilities/armaments are abundant and upgradable. Sword, hammer, fire breath, tornado, bombs, and other stuff all have their combat utility, but the game is easygoing enough that most of the time, they don’t feel like a tactical choice. You’ll use the one that feels right, upgrade it along the way, and occasionally shift when encountering those optional challenges. For example, remote switches that open some secret passage can be activated only with the ranger’s ballistic weapon. Even if you started the level with something else, there would be a suckable ranger whose weapon you can liberate in the vicinity of the said switch.

Weapons have three to four upgrade tiers, and apart from the blueprint for the upgrade, you’ll also need gold coins and treasure stars. Some plans are unmissable and found along the way, some are hidden, and few are acquired after defeating a powerful, optional foe. For example, the blueprint for the meta-knight sword with a broad, long-range attack pattern will be yours after finishing the optional Colosseum tournament. 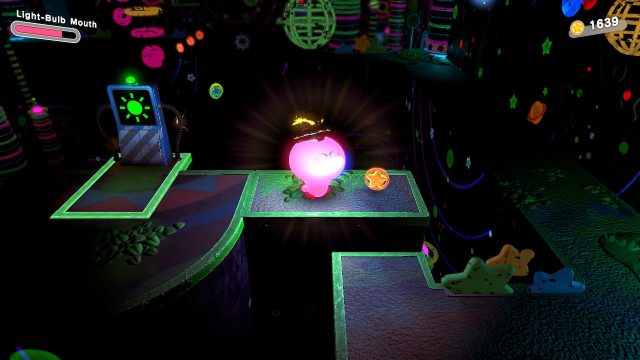 Kirby and the Forgotten Land is an excellent family game, especially in a two-player co-op. It’s ideal for a parent and child combo. By playing Kirby, a parent can utilize his abilities and lead the progression through levels. As a secondary player in a much less demanding role, a child can act as a wingman and have a blast while not worrying about combos, damage types, and searching for secrets. My young daughter and I had an absolute blast playing the game. It took us a whole week of afternoon sessions to complete the campaign and tackle a solid number of optional missions. This was her first Kirby game, and now she wants more, which is precisely the same sentiment I had all those years ago.