Designed around a tactical module similar to Final Fantasy Tactics and visually sculpted to be almost identical to Octopath Traveller, Triangle Strategy sounds like an intriguing prospect. It also has a story that tastes like Game of Thrones flavored with a big helping of sweet JRPG powder. The game’s epic, fully voiced narrative is around forty hours long, and it’s stuffed with a great cast of villains and branching paths that facilitates multiple playthroughs. I can almost hear you saying that famous Jango Unchained line now. Do I have your curiosity? Will it escalate into attention?

Triangle Strategy is a Nintendo Switch exclusive tactical JRPG that pleasantly scratches several important itches. It also moves in a way that could successfully repel impatient players not used to classic JRPG pacing. Its initial exposition will feel excruciatingly long – around four hours, to be exact. That is a price that even the JRPG audience could find steep.

Armor yourself with patience

During that protracted exegesis, you will learn about Norzelia, land that comprises three constituent parts. In the north, we have Grand Duchy of Aesfrost, a mountainous country famed for their iron mines; In the east lies the Holy State of Hyzante, a religious egalitarian pseudo-republic that represent the only source of salt in the lands; the Kingdom of Glenbrook, in the middle of the map, draws its power from trading with everyone. Three entities waged a near-genocidal war thirty years ago that left them devastated. Now rebuilt, they agree to pursue a lasting peace. The first step in that journey is the joint mining venture exploiting the newly discovered and abundant iron deposits. They conform to cooperate and enjoy the natural bounty in an egalitarian fashion. But fate had other plans.

Central to the story is young lord Serenoa, heir apparent to one of Glenbrook’s noble houses. To cement the future alliance, Serenoa is to be wed to Frederica from Aesfrost. To complicate matters, Frederica is a noble bastard from the late Duke of Aesfrost fling with a concubine. I could go on and spoil the four hours of exposure for you, but I would be doing you a disservice. The story is rich, enjoyable, with many twists and turns in the long, branching campaign. 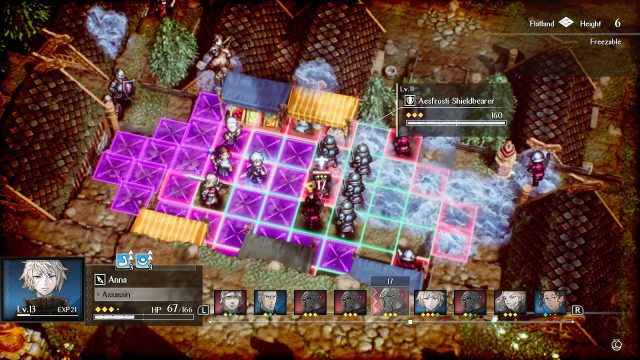 The combat module is turn-based and very reminiscent of Final Fantasy Tactics. It’s a standard tactical affair with melee, ranged, magical combat, initiative, positioning, and elevation benefits. Every team member has a fixed class, but apart from those related to the story, you can recruit extra help. That way, for example, you can have more than one archer in the field. Your guys earn XP with every action and have upgradable stats and gear, but the alteration process stops there. It is not possible for Serenoa, for example, to abandon his melee ways and follow his betrothed in pursuit of fire magic.

Even on the normal difficulty level, things can get thick pretty fast. Story battles rapidly escalate in difficulty, but the levels and equipment of your team members usually lag behind the requirements. You must remedy that by grinding mock battles in your encampment, farming XP, and upgrade materials until you feel confident in tackling the main challenges. This grind exists in place of side-quests, and it’s not very elegant, all things considered. The good thing is that you keep XP and loot in any case, even if you fail in the story mission, so the progress always moves in the right direction. 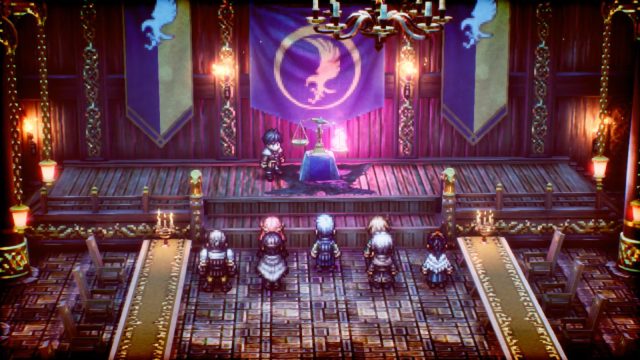 Every few chapters, there is a critical decision to be made. Being a progressive lad amidst all that feudalism, Lord Serenoa asks everyone to vote on it. Members have their own opinions about the course of action that needs to be taken. The good thing is that you know where everyone is standing before the vote is cast; The bad is that you have limited options to influence their decision should it conflict with yours. So you’ll talk to them, picking one of three talking points to sway them and see the things your way.

The stuff you decide is crucial and steers the campaign into exclusive branches. For example, one of the early votes deals with ransom demands from the hostile kingdom that prepare an assault on your castle. Will you deliver the prince, your childhood friend, and an important ally to deter an attack on your demesne, or will you try to weather the onslaught together? There are no trivialities here.

We always called each other Goodfellas 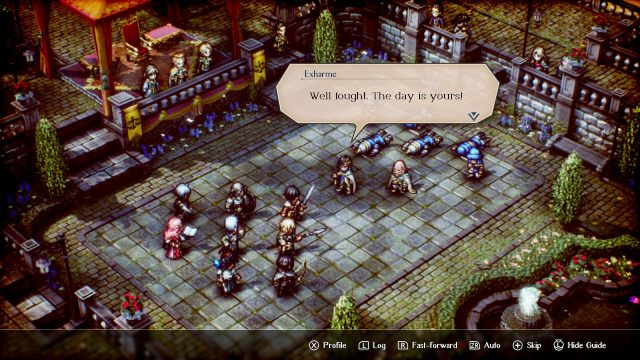 The one thing I don’t like about Triangle Strategy is the blandness of the good guys. There is a pretty sharp contrast between masterfully crafted villains and the polite, boring flatliner that is young lord Serenoa. Frederica, his poor fiancee, is even worse. She basically plays the stressed, shell-shocked, overly emotional victim that constantly apologizes for things beyond her control. Yes, those two and others will eventually rise to the occasion and grow in most aspects, but they’ll never become exciting.

If you are a Switch owner and tactical JRPG fan, you can’t go wrong with Triangle Strategy. People who got emotionally and physically drained from non-stop exposure to Elden Ring and its cryptic lore could use this game as an antidote. This direct, ultra-contained tactical experience with a straightforward narrative will help you center yourself, and that is always a good thing.