The idiot shooter must be recognized as a subcultural phenomenon to succeed commercially. Shadow Warrior games never quite managed to get there, but not for the lack of trying. The games, both originals and the modern reimaginations had always lacked certain ZING, the factor that Duke Nukem and Serious Sam had in abundance. I mean, just think about Duke. The last good game featuring him came in 1996. but he still floats in the Zeitgeist. For idiot shooters, it’s all about the protagonist. Their idiocy needs to be serious, so to speak, balanced between stupidity and wit. Unfortunately, Shadow Warrior’s Lo Wang is an annoying cretin with below frat-level humor.

The fact that Shadow Warrior 3 is less ambitious than Shadow Warrior 2 surely won’t help improve the series’ reputation. It starts without much retrospection, assuming familiarity with its 2016 prequel. I played it when it came out, but I honestly don’t remember much about it, save for the goofy hero, assassin Lo Wang. Apparently, there was a big fight at the end (YOU DONT SAY?!), a giant dragon emerged from the void and swallowed Mr. Wang.

The dragon ate you; what now?

Shadow Warrior 3 deals with the aftermath of that cliffhanger. The massive dragon from hell had established a presence in our world, sucking the very life out of it. Lo Wang is alive but not well, suffering from depression, but soon gets jolted into action again. With the help of Zila, former employer and adversary, and a few others, he will hunt that dastardly dragon through dozen confined levels.

Lack of ambition is evident everywhere, but it’s most visible in super-simplified level architecture. Each level is just a tight corridor constructed as a simple jumping challenge doted with Doom-style combat arenas. Lo Wang can wall-run and double jump now, and developers went wild with his brand new abilities, stuffing them deep into your throat. You will repeat, ad nauseam, the jump+jump+dash sequence, grabbing the green anchor points in the platforms, listening to stupid jokes, and wishing for the next combat sequence to come sooner. 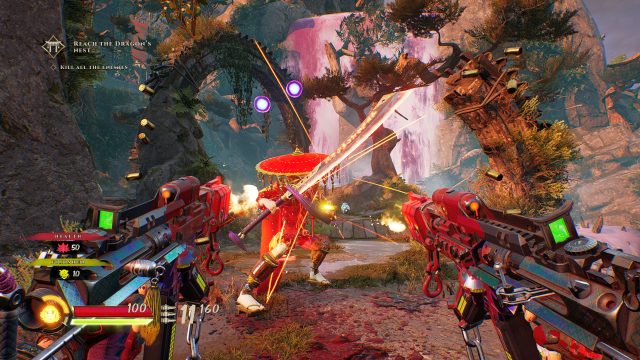 Combat is actually pretty solid. You’ll be fighting various yokai demons inspired by Asian folklore and twisted to fit the game’s crazy narrative. Your arsenal of six ranged weapons and katana may seem limited, but the synergy between systems is well thought off. You can’t carry much ammo, but if you kill mobs with katana, they will drop more; if your health is low, gun them down, and they’ll drop health and finisher globules. Doom Eternal uses a similar concept, and same as there, it helps with the combat flow. You can also use Chi blast as a quick disorienting attack on a short cooldown, helpful in putting enemies on the back foot. For example, if you hit Laser Shogun with chi, he will turn around and expose his vulnerable backside. 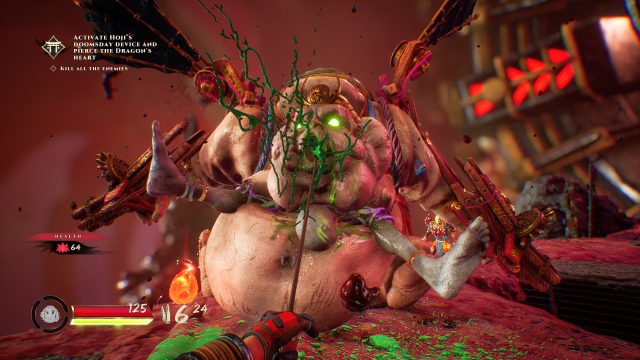 Finisher charges are the nuclear option when shit hits the Wang. Depending on the size and the power of the enemy, you’ll need to expend one to three charges to instakill it. Every mob finished that way will temporarily grant you a powerful weapon, an instagib grenade, or something else equally powerful. Finishers are great when you find yourself cornered as they also replenish your HP. As in Doom and Doom Eternal, constant movement is key to survival. Some arenas are equipped with trap doors, spike wheels, or another deadly mechanism you can remotely trigger and instantly eliminate many mobs. Being quick on your feet will also help you get the health or ammo drops that periodically spawn.

There is an upgrade system for weapons and Wang himself, which uses tokens awarded by completing internal achievements. You’ll also find those tokens lying around. On rare occasions, you will be tempted to stray from a beaten path to attempt the retrieval of a temptingly placed token.

Short but not very sweet 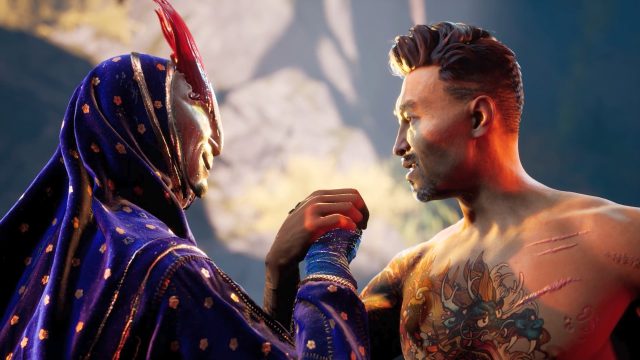 Not every game needs to be a fifty-plus hours hijacker of life. In a month when Dying Light 2 and Elden Ring came out, I’m grateful for a game that can be finished in one (long) sitting. Shadow Warrior 3 is relatively short, clocking between five and seven hours, depending on your skill. But those hours could feel like days if your tolerance to moronic jokes is not obsidian-solid. Lo Wang’s identity, and by extension, that of the entire franchise, is sculpted around the stupid quips and cringy dialogue. They are repetitive, not provocative in any way, and mostly devoid of any wit. You really don’t want any examples. 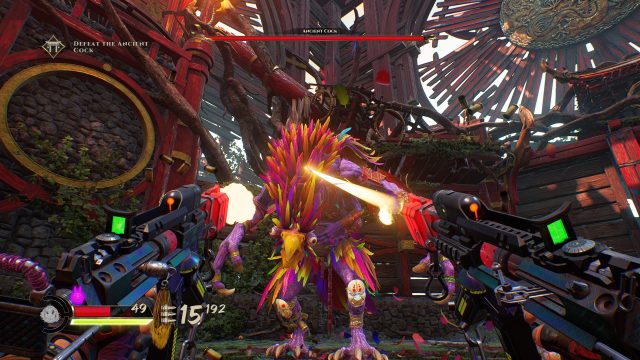 The PC version of the game has a significant problem with stuttering. It relates to texture streaming at the start of every engagement, scenery change, or the beginning of a cutscene. None of the fixes people suggested on forums worked, nor did fiddling with options produce any positive result. I decided to give it a week, hoping for a patch or hotfix, but it never came, so I gave up and tried to live with it. Playing like this was extremely annoying at first, but Humans are adaptable beasts.

Should you play Shadow Warrior 3? The current price is pretty steep for the limited amount of fun it provides, so I recommend waiting for a deep discount. But even then, you will always have better options among goofball shooters. Even Shadow Warrior 2 is better, not to mention recent Serious Sam games.